Seahawks and First & Goal Inc. projects will offer new 'Fanovation' over the next three years to modernize and upgrade the fan experience 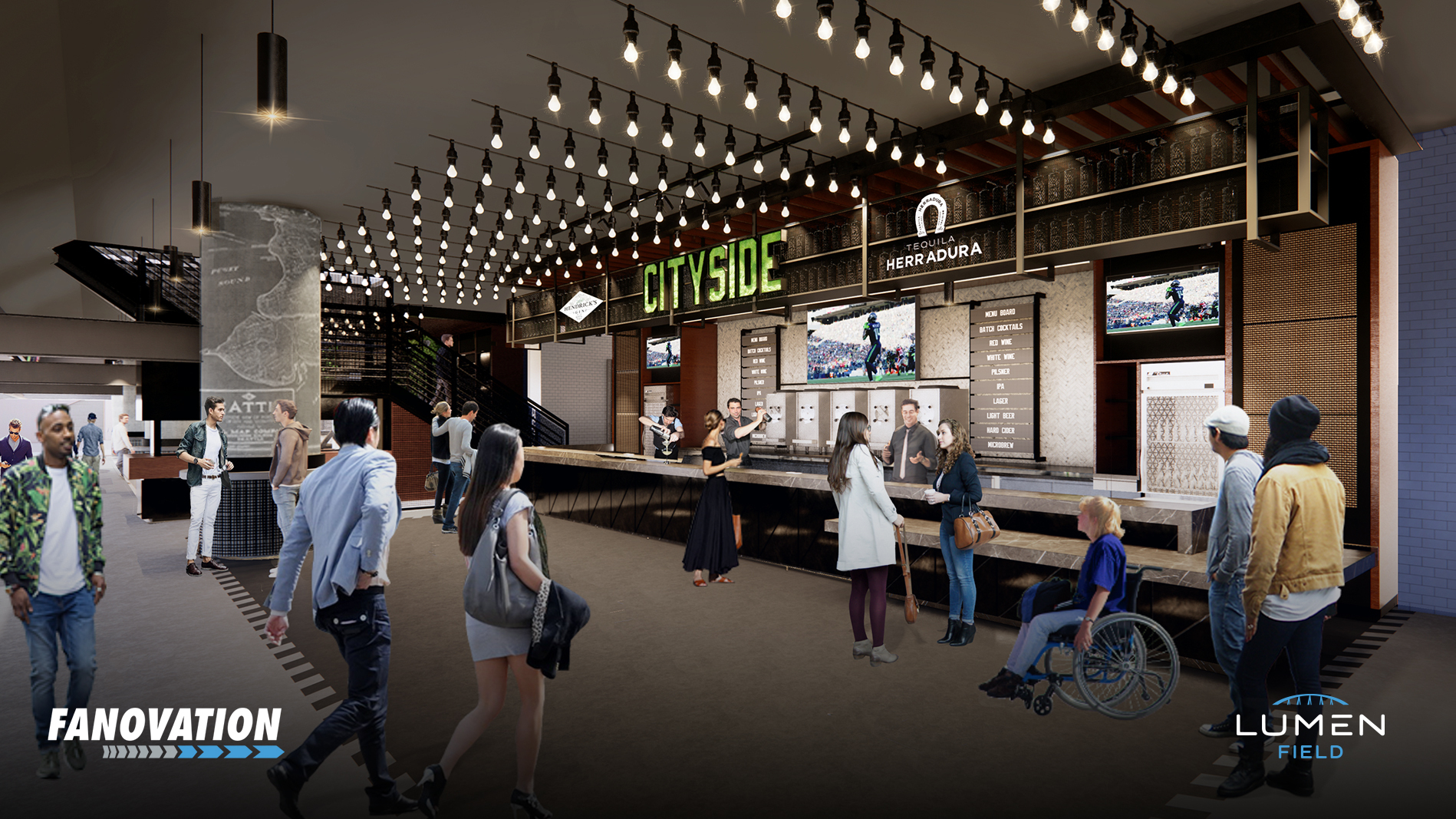 “As we celebrate 20 years of incredible sports and entertainment events at Lumen Field, we are thrilled to re-imagine and transform our guest experience,” said Chuck Arnold, President, Seattle Seahawks and First & Goal Inc. “We’re calling these upgrades ‘fanovation’ – where our fans and their experience are at the forefront of our decisions. We are excited for our guests to see several new innovative projects come to life at Lumen Field over the next three years.”

Renovation Projects for 2022 Include:

A new 6,300 square foot premium food & beverage area named Cityside Bars will be added in the north end of the stadium. Open to all fans on gameday, this project transforms the currently unused space underneath the stadium’s iconic Hawks Nest into a covered open-air fan gathering area with premium lower-level views of the playing field. The space will feature two nearly 40-foot-wide bars – Hendrick’s Gin Cityside Bar and Tequila Herradura Cityside Bar – along with 83 feet of drink rails facing the field, an oversized outdoor gas fireplace, and Pacific Northwest-themed finishes. The new amenities at Cityside Bars are scheduled to be complete for the 2022 Seahawks season.

Installation of two new north-end video boards will significantly enhance the fan experience. The Mitsubishi Pixel Pitch Diamond Vision displays (39.90’h x 70.34’w) will more than double the size of the previous video boards. Fans can expect to see the full 16x9 game presentation highlighted by enhanced graphics and 4K pan and zoom for highlights and replay reviews. The new video boards are scheduled to be completed for the start of the 2022 Seahawks season.

Concession enhancements are on the way for the Upper Concourse. An area titled District Market will be added in the south end of the upper level behind the Toyota Fan Deck and offer a more modern, open food and beverage experience with the opportunity for checkout-free transaction technologies. The space will also feature food from the stadium’s community neighbors in Seattle’s International District.

Additional details on Lumen Field Fanovation projects scheduled for 2023 & 2024 will be announced in the future, including:

Lumen Field plans to add a new pregame Tunnel Club. This new premium offering will provide Seahawks fans a ticketed pregame hospitality club adjacent to the home locker room where they will have the opportunity to see players as they go to and from the playing field. The new Tunnel Club will also feature all-inclusive premium food and beverage options.

The stadium’s Verizon Lounge is scheduled to undergo numerous future renovations. The current Verizon Lounge serves as a buffet-style restaurant pregame, with two bars available throughout the game to Delta Sky360° Club ticket holders. Preliminary concepts for the space’s remodel include creating two standing room open-air decks with views of the field, a new premium bar, and general upgrades to finishes throughout the area.

Innovating the fan experience continues to be a top priority for both the Seahawks and Lumen Field. The Seahawks recently ranked #1 in the NFL and #18 overall on Sports Innovation Lab’s 2022 list of “Most Innovative Teams in the World.” The list cited the organization’s commitment to analytics, technology, digital content and DEI programs as key reasons for its ranking.

The Lumen Field stadium complex includes Lumen Field, the 325,000 sq. ft. Lumen Field Event Center, and WAMU Theater, and is home to the NFL’s Seattle Seahawks, MLS’ Seattle Sounders and NWSL’s OL Reign. In addition, Lumen Field and Lumen Field Event Center typically host more than 300 event days and 2.4 million attendees annually during an average year. The venue has hosted many premier concerts, including Beyoncé, Metallica, Rolling Stones, Taylor Swift, and U2, as well as international soccer matches, Supercross, corporate events and community gatherings. The stadium currently holds a 154-game sell out streak for Seahawks games, and recently set a Concacaf Champions League attendance record of 68,741 for the 2022 CCL Sounders vs. Pumas final. In June 2022, FIFA announced Lumen Field as a host venue for the FIFA World Cup 2026. Celebrating the local community, including the support of women and minority-owned businesses in its hiring and vendor selection processes, is also a priority for the stadium and its commitment to the growth of the vibrant Seattle economy.

In celebration of the stadium’s 20th anniversary, Lumen Field will relive various memorable moments from under the arches. Seahawks gamedays will feature iconic moments and bring back special guests to celebrate. The stadium’s social media channels will also celebrate significant anniversary dates, such as the first games for the Seahawks, Sounders, and OL Reign, along with historic concerts and other events from its history. Fans will also have the chance to win tickets to 20 events at Lumen Field this year in celebration of the 20th anniversary. Fans can follow along on Lumen Field’s social channels for details.